In conjunction with the exhibition SYLVIA BATAILLE, JOAN presents a screening of Peggy Ahwesh and Keith Sanborn’s The Deadman (1989), with a special introduction by author Maggie Nelson, this Friday, December 11 at 7:30pm.

Based on Sanborn’s translation of Le Mort, a story by Georges Bataille published posthumously in 1967, The Deadman follows the crude, scatological, and ecstatic adventures of the near naked Marie in what Ahwesh describes as “one long female juissance (sic).” Marie burps, pisses, grunts, comes, wretches, and shits, inciting a raucous orgy at a local bar as she hurls her body and its sex between and across a cast of characters that include a barkeeper, a fool, and a count, among others. Ahwesh’s first 16mm film, The Deadman mixes experimental and narrative styles of filmmaking, following a legacy that includes the work of Stan Brakhage, George Romero, and Jack Smith as well as Ahwesh’s contemporaries Su Friedrich and Leslie Thornton. 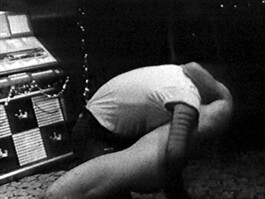 Peggy Ahwesh is a media artist based in New York who has been active since the 1970s in a variety of technologies and methodologies of film, video and sound. Recent exhibitions include Kissing Point, Microscope Gallery, Brooklyn, NY (2014); City Thermogram, a site specific video project sponsored by Midnight Moment, Times Square Arts, New York (2015); and Two Serious Ladies, a two person exhibition with Jennifer Montgomery at Murray Guy, New York (2015). Significant screenings include The Private Glance, Tate Modern (2010); Laugh My Darling, Guggenheim Museum, Bilbao (2009); and the Whitney Biennial, Whitney Museum of American Art (1993, 1995 and 2002.) Her numerous awards include an Alpert Award in the Arts, a John Simon Guggenheim Memorial Foundation Fellowship, and grants from the Jerome Foundation, Creative Capital, and the New York State Council on the Arts. She is Professor of Film & Electronic Arts at Bard College, Annandale-on-Hudson, NY.

Keith Sanborn is a media artist, theorist, curator and translator based in New York. His media work has been featured at festivals such as the Rotterdam International Film Festival; The European Media Arts Festival, Osnabrück; Rencontres Internationales Paris/Berlin; OVNI, Barcelona; the New York Film Festival; and in major museum surveys such as the Whitney Biennial (2002); The American Century, Whitney Museum of American Art (2000); and the Pompidou Centre’s Monter/Sampler (2000). His theoretical and critical essays have appeared in contexts ranging from Artforum to Kunst nach Ground Zero to catalogues for MoMA, Exit Art, and the San Francisco Cinematheque. His extensive translation work includes the writings of Guy Debord, René Viénet, Georges Bataille, Lev Kuleshov and Paolo Gioli among others. He teaches at Lewis Center for the Arts, Princeton University and in the MFA program at Bard College, Annandale- on-Hudson, NY.

Maggie Nelson is an American poet, art critic, lyric essayist and nonfiction author of books such as The Argonauts (2015), The Art of Cruelty: A Reckoning (2011), Bluets (2009), The Red Parts: A Memoir (2007), and Jane: A Murder (2005). The Art of Cruelty was a 2011 Notable Book of the Year by the New York Times and recipient of a Guggenheim Fellowship in Nonfiction. Nelson has taught at the Graduate Writing Program of the New School, Wesleyan University, and the School of Art and Design at Pratt Institute; she currently teaches in the CalArts MFA writing program. She was awarded an Arts Writers grant in 2007 from the Creative Capital/Andy Warhol Foundation. In 2011, she was awarded a National Endowment for the Arts Fellowship for Poetry.

SYLVIA BATAILLE, organized by Adam Marnie and Rebecca Matalon, is on view at JOAN through December 20, 2015.