In conjunction with the exhibition SYLVIA BATAILLE, JOAN presents a rare screening of Kathy Acker and Alan Sondheim’s Blue Tape (1974). The black-and-white video depicts a sexually explicit, emotionally charged, and psychologically fraught encounter between a twenty-six-year-old Acker and a thirty-one-year-old Sondheim that took place over the course of a 48-hour period in Sondheim’s New York City loft. Blue Tape opens with a close-up shot of Acker as she recounts her initial meeting with Sondheim several weeks prior and the subsequent unfolding of events leading to the making of the work, including her practice of “memory experiments,” intended to “break through memory to desire.” With the camera framed tightly on Acker, Sondheim reads aloud a text she sent to him in advance of their second meeting in which she ascribes to him the role of her father, whom she never met. The text, and Sondheim’s out-of-view recitation, set the stage for the exchange (of ideas, of roles, of pleasure and its lack, of fluids) we bear witness to over the next 55 minutes. Blue Tape is a gritty, raw, and pathos-laden double portrait of Acker and Sondheim as they act out and explore psychoanalytic experimentation and the struggle for and denial of power. 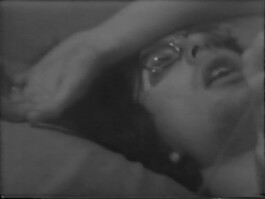 Kathy Acker (1947-1997) gained cult status as a punk feminist icon over the course of her career. An experimental novelist, poet, and art critic, Acker is best known for her use of appropriation, pastiche, and other techniques that allowed her to blend fact and fiction, biography and dream images, hardcore sex and caustic political satire into an innovative, non-narrative Cyber-Punk style. Novels include Blood and Guts in High School (1984), Don Quixote: Which was a Dream (1986), and Empire of the Senseless (1988), among many others. A collection of her essays, Bodies of Work was published in 1996. Acker died of cancer in Tijuana in 1997.

Alan Sondheim (b. 1942) is a poet, critic, musician, artist and theorist, whose work has pursued the depths of cyberspace and the effects of the virtual on the real for the last 40 years. Since 1994 Sondheim has been producing his major work “The Internet Text,” which includes the sum total of his writing online. His website, alansondheim.org, presents the complexity of this project in a sprawling archive of remnants—a life in its minutia encoded in text, along with image, video, and sound. Writing Under: Selections from The Internet Text was published by West Virginia University Press in 2012.

SYLVIA BATAILLE, organized by Adam Marnie and Rebecca Matalon, is on view at JOAN through December 20, 2015.