F is pleased to present Face Index, a solo exhibition by Houston-based artist Mark Flood. The exhibition is comprised of two artworks from the early 1990s, Face Index, from 1992, a collage in eight parts, and Dynasty, from 1993, an acrylic painting on fabric stretched over panel. This show is the first time Face Index has been exhibited as an artwork and the first time Dynasty has been on view for more than 25 years. In addition, the exhibition is accompanied by a new publication, The Origin of Mark Flood, which includes an essay by Adam Marnie that details Flood’s path from 1987—1992, published by Karma, New York. The exhibition will be on view from November 13 – December 23, 2021, by appointment, at 4225 Gibson Street, Houston, TX, 77007.

In The Origin of Mark Flood, about Face Index, Marnie writes: "Face Index was never intended to be an artwork. As a collage, it simply collects information in order to process that information with the means necessary to make other works. Face Index is literally a filling cabinet, or part of a factory assembly line: the many collected faces were sorted by size, and glued to sheets of drawing paper. These were then cut down into long strips that could be easily run through a Xerox machine to make enlargements, and from which, the faces were turned into silkscreens. The whole of the work was deliberately constructed as a means to other ends... it is both resting place and springboard.
"[Mark adds,] "it always smacked of failure to me. I wanted to have 5,000 screens made. But what would I have done with them? It turns out I didn't need them, a little celebrity face goes a long way." At the time, Mark could only afford to make a small number of screens, but these he used again and again, in the Protest Signs from 1992, in the paintings exhibited in the 1993 Los Angeles show Trophy Paintings at Zero One Gallery, in overpainting the Klonos Derivatives, and numerous other works made during this period."

Dynasty is an example of such an artwork. It was one of the works originally shown in Trophy Paintings, and it is also an example of Flood’s use of the Face Index screens to overpaint a Klonos painting; in this case, Mark was commissioned (as John Klonos) to paint large-scale portraits of Marilyn Monroe and John Wayne in a Warhol style on Accord (a polypropylene fabric used to cover speakers). The underpainting for Dynasty is of Marilyn Monroe, on top of which Mark added other portraits: Johnny Carson, Humphrey Bogart, Jason Bateman, Michael J. Fox, Arnold Schwarzenegger, and Captain Kangaroo, among others. The original media clipping for each of these are clearly visible in Face Index.
Copies of The Origin of Mark Flood are available at the exhibition, or from Karma, here 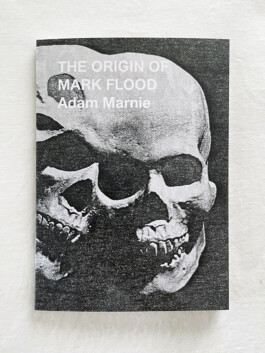